CWDM or DWDM – What is the difference?

To recap, both CWDM and DWDM use differing wavelengths of light to transmit data over a single fiber, however they differ in the spacing of the wavelengths and the number of channels that they can each carry. Wavelengths on DWDM are packed more densely (hence the name) than on CWDM, and the signals can be amplified, enabling data to be transmitted over longer distances.

Let’s take a look at how this works in greater depth.

This means that CWDM can support up to 18 channels and with DWDM it is possible to fit 40, 80 or up to 96 channels on the same fiber pair. 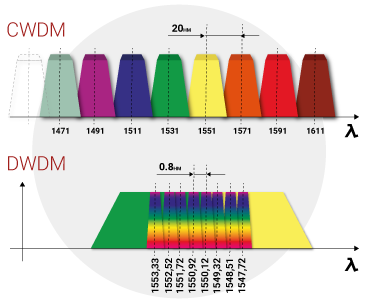 The channels on CWDM are located on frequencies between 1271nm to 1611nm, whereas for DWDM the “C-band” 1530nm – 1565nm frequency range is most commonly used as the light has a lower attenuation in optical fiber at this frequency and can travel further. 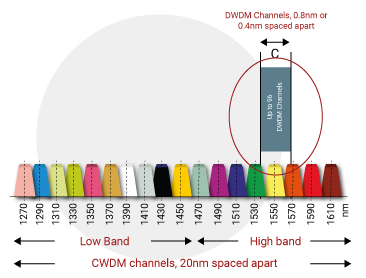 As lasers reach higher temperatures, they transmit light at a slightly different frequency and can therefore “drift” off a narrow frequency window. Because DWDM systems have closely spaced wavelengths, they need to maintain a more stable frequency than for CWDM with its wider channel spacing. To solve this problem with DWDM, cooled lasers are used to ensure accuracy for a longer period of time. The drawback to this is higher power usage and more complexity which can result in higher costs in running DWDM. Historically, DWDM transceivers have been more expensive, with the majority of the manufacturing costs coming from the laser. However, the technology has now developed to a point where prices between CWDM and DWDM are much closer.

CWDM signals cannot be amplified, but signals can be carried across all 18 ITU channels for distances up to 80km, which limits it as a lower cost solution for networks in metropolitan areas, for example. DWDM, by contrast can be amplified using EDFA or RAMAN amplifiers to reach distances over 3000km, suitable for the construction of long-haul and sea cable systems. However, the quality of a DWDM signal constantly decreases due to attenuation in the fiber, and when the signal is amplified it also amplifies “noise”. The Optical Signal to Noise Ratio (OSNR) is important in long-haul DWDM systems, and there is a limit on how many times it is possible to amplify a signal so that it can still be decoded when it arrives at the other end. There are other challenges to long-haul DWDM systems, such as different wavelengths of light traveling at slightly different speeds, over long distances, will start to blend together, otherwise known as “chromatic dispersion”.

DWDM can carry more bandwidth per channel than CWDM. Pluggable transceivers for DWDM are now able to reach 400 Gbps and there are integrated components that can push over 1 Tbps, whereas for CWDM the current maximum is 100 Gbps. So, if you need to carry higher bandwidth over shorter distances, DWDM is certainly an option to consider.

Finally, if you want to limit the use of electrical power in your implementation, passive CWDM and DWDM are both options. Passive DWDM enable high speed systems, with high channel capacity, but with a transmission distance limited to use on metropolitan networks needing high speed communications. 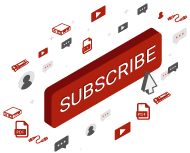 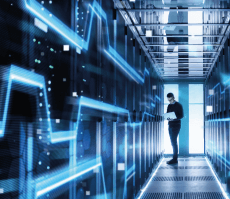 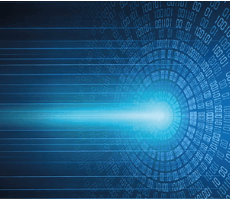 Read about the different types of laser which are the key component of fiber optical transceivers, affecting cost and transmission distance. 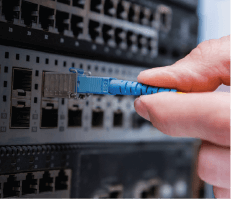